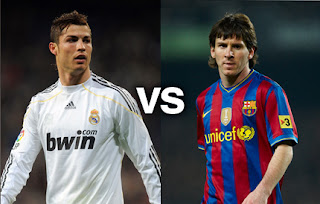 In terms of Social Media presence, which is a major draw for sponsors as well as fans, Ronaldo leaves his diminutive Argentine rival far behind in his wake. Ronaldo has more than 50 million fans on his official fan page, far more than any other sports team or player. As a matter of fact, Ronaldo’s fan page is the 13th most popular fan page of any kind on Facebook.

If tabloid presence is considered as a parameter, then Ronaldo again scores one over Messi. Ronaldo is ubiquitous when it comes to gracing the back pages of his tabloids. Furthermore, Ronaldo has carefully managed his brand image by hiring entertainment company Creative Artist Agency to manage his deals. Ronaldo also has his own fashion logo called “CR 7”. On the other hand, Messi’s father manages and advises his career moves and endorsement deals.

There is no shortage of endorsement deals for the both of these players. Ronaldo has sponsorship deals for Nike, Armani, Coca-Cola and Castrol while Messi is the face for Adidas, PepsiCo, Chery and KFC. Both these players come from a Latino heritage but Ronaldo’s ability to speak in English is another big advantage.

Ronaldo scores high on the Glam Quotient scales and is a true showman whereas Messi is an artist who goes about his job with tremendous humility. Overall though, brand Ronaldo probably edges it when it comes to being the more marketable athlete.
Posted by Apratim Mukherjee at 6:50 AM